Springtime in Washington, DC, in a glass.

Info: Spring in Washington, DC is all about the Cherry Blossoms. In 1912, over 3,000 flowering cherry trees, or “Sakura” were given “as a gift of friendship to the People of the United States from the People of Japan.” Researching this I learned that “in a gesture of gratitude for the cherry trees, in 1915 President Taft sent a gift of flowering dogwood trees to the people of Japan.” DC, my neighborhood (Dupont) especially, presents a solid Dogwood game as well. The biggest hurtle to enjoying the blossoms is the amount of study/gamble/shear luck it takes to plan a trip that catches those unpredictable and illusive 3-5 days of peak bloom, or any blooms. My mother is yet to experience the blossoms, as she has miscalculated three separate trips. Unlike most Washingtonians, I have not missed at least one short visit to the Tidal Basin in the 20 Springs I have spent in the District. I am never disappointed. Until I see someone shake a branch, then I shake my fist while muttering, hopefully quietly.

The Sakura Spritz is my serenade to Spring in Washington, DC. Suntory’s Roku Gin is the base spirit for many reasons. Roku means 6 in Japanese: representing the 6 main “botanicals cultivated over four seasons” in this citrus forward gin (Spring: Sakura Flowers and leaves/Summer: Sencha and Gyokuro teas/Fall: Sansho pepper/Winter: Yuzu peels. Plus juniper berries, coriander, angelica seed and root, cinnamon, cardamom, bitter orange and lemon peel). The cocktail is sweetened with local raw honey, balanced with Yuzu (a Japanese Citrus), tarted up with a local Virginia cherry blossom vinegar (I will call it shrub on a menu. Vinegar still reads too harsh to the American pallet) from Lindera Farms, and brightened with cold soda water. 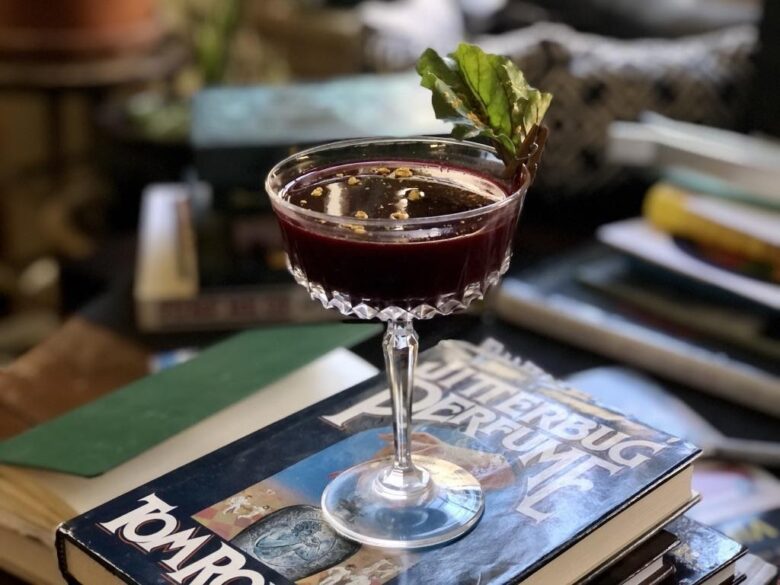 Info: This cocktail is inspired by Tom Robbins’ 1984 novel Jitterbug Perfume. The clever, fun and free-spirited writing of Tom Robbins “rejects convention” as does Revival Spirits. Jitterbug Perfume is a playful, wild and sexy book about memory, perfumes, Pan, searching for immortality, what is really important in life and beets. A good vibe for a fun tastefully naked charity photo shoot. What is sexier than a beet or more immortal than a photo. Perfume is central to the novel. Smell is key to taste and strongly connected to memory. Perfume and distillation are connected as well. Life is about stories. Avery Gilberg, a Sensory psychologist specializing in olfaction, summarizes the novel well and in context of this cocktail in his blog First Smell: TAKING A SCIENTIFIC SNIFF AT THE CULTURE OF SMELL:

“The story takes place in present-day Seattle, New Orleans and Paris, but also follows the adventures of Alobar, a fourth- or fifth-century Bohemian tribal king, as he defies death and aging and wanders the globe in search of the secret of eternal life which involves creating the perfect perfume. Alobar is followed on travels by Pan, the invisible, goaty-smelling and ever more enfeebled Greek deity. In a nutshell, Robbins’ theme is that life is extended by laughter and a light heart, and that perfume is a bridge to the infinite.”

The perfume they finally create to cover Pan’s offensively robust pheromones contains 1 part beet pollen, 20 parts jasmine oil, and 20 parts citron essence.” My ode to this odor uses a base of Yellow Chartreuse (“the original recipe was named the “Elixir of Long Life.” This manuscript was probably the work of a 16th century alchemist with a great knowledge of herbs and with the skill to blend, infuse, macerate the 130 of them to form a perfect balanced tonic. Today, this “Elixir of Long Life” is still made only by the Chartreuse monks following that ancient recipe, and is called Elixir Vegetal de la Grande-Chartreuse. Yellow Chartreuse is sweeter than green, has a lower ABV, Chamomile and honey are the dominant flavors”) which is then consciously infused with Jasmine (unfortunately not “Jamaican jasmine supplied by a mysterious man with the helmet of swarming bees, Bingo Pajama.”), bee pollen and raw honey instead of beet pollen because of availability, their earthy funk, and this quote:

Lemon juice for the citron essence, Peychaud’s bitters to honor the New Orleans connection in the novel and beet juice. Earthy and sexy beets are essential to both the novel and cocktail known by the same name. The opening lines of the novel speak to the nature of the beet,

“The beet is the most intense of vegetables. The radish, admittedly, is more feverish, but the fire of the radish is a cold fire, the fire of discontent not of passion. Tomatoes are lusty enough, yet there runs through tomatoes an undercurrent of frivolity. Beets are deadly serious….

….Slavic peoples get their physical characteristics from potatoes, their smoldering inquietude from radishes, their seriousness from beets….

…..The beet is the melancholy vegetable, the one most willing to suffer. You can’t squeeze blood out of a turnip…

…..The beet is the murderer returned to the scene of the crime. The beet is what happens when the cherry finishes with the carrot. The beet is the ancient ancestor of the autumn moon, bearded, buried, all but fossilized; the dark green sails of the grounded moon-boat stitched with veins of primordial plasma; the kite string that once connected the moon to the Earth now a muddy whisker drilling desperately for rubies.”

Prep: Take a few big deep breaths and shake it out. Put on uplifting funky music (I have a Spotify playlist “Jitterbug Perfume” started for you), put it on loud. Light some incense. Adorn yourself with your power jewels. Apply bright, joyful makeup, dress up or down, just feel it. Put your personal style and emotion into your libation creation situation.

Garnish: Small beet leaf clipped, stem inside glass, flat as possible with a mini clothespin, sprinkle bee pollen on leaf and gold luster dust on leaf and in glass as desired.

Build: in tin, shake, strain into chilled coupe. Garnish.
*Also, delicious with the addition of an egg white.

-Incorporate all ingredients in a glass jar, seal and lightly shake. Let sit at room temp for at least a few hours(or to preference), remembering to lightly stir often. Fine strain, seal and store in a sexy blue glass vessel.

Hawaiian and tiki drinks are always thought of as fruity and sugar-filled, [yet] this cocktail is actually an Old Fashioned variation. All the flavors absolutely invoke a breeze from the gentle slopes of Mauna Loa is a surprise for many guests.

Add all ingredients except garnish to a cocktail glass, add ice and stir until well-chilled. Strain and serve over a large rock ice ice and garnish with the orange peel.

*For the macadamia nut-infused Bulleit Bourbon:
Lightly pulse 4 1/4 oz. macadamia nuts in a blender, then toast them in the oven at 300 degrees Fahrenheit or 4 minutes or until lightly golden brown and oily. Remove the nuts from the oven and add to a 750 ml bottle of room temperature Bulleit Bourbon. Seal the bottle and set aside for the day, shaking occasionally. Place the bottle in the freezer overnight. The following day, strain out solid using chinois and then a coffee filter. Keep the Bourbon refrigerated. 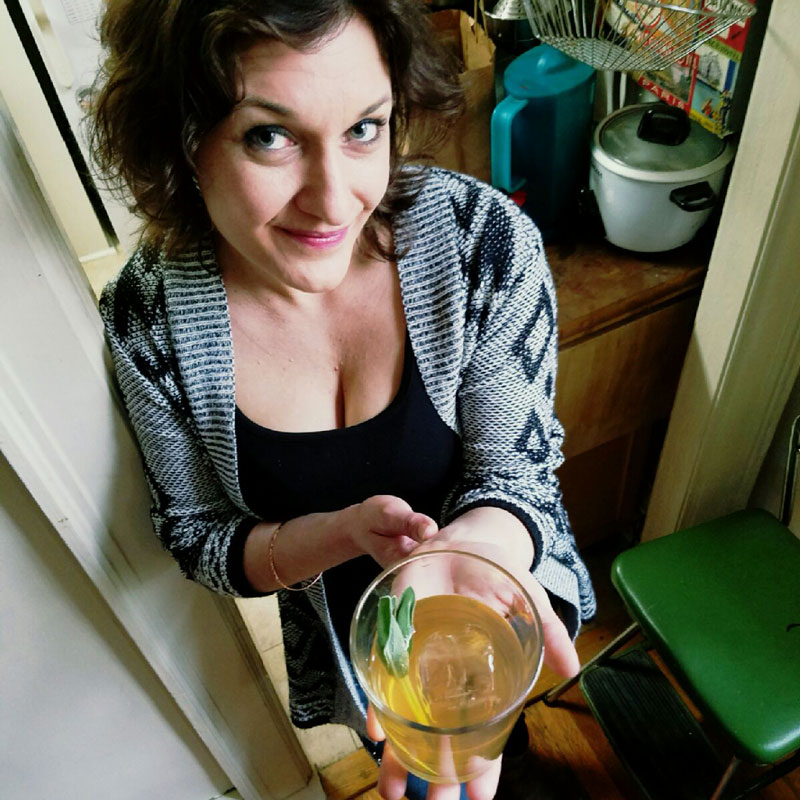 Swill Merchants Co. may have been conceived during a pandemic, but Sarah Rosner, the lady who started it all, has been a legend in the DC bartending and cocktail scene for over 19 years. She has won numerous competitions, features, awards, and write-ups due to her creativity and storytelling that she embodies in her cocktail making.

Interested In booking a class, curating a personal cocktail, or have general questions? Contact at (202) 262.2999 or SwillMerchantsCo@gmail.com.